"Titans" is a trap song by Razihel and Aero Chord that was released in late June 2015. 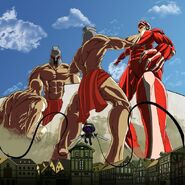 A piece of official fan art for the song, as shown on Monstercat's Twitter.

Community content is available under CC-BY-SA unless otherwise noted.
Advertisement