Jersey club is a breakbeat genre of music. Jersey club originated during the 1990’s, specifically in New Jersey the city of Newark (affectionately nicknamed “Brick City”) with roots that where largely influenced by the Baltimore club scene of the 80’s. Jersey club is a staccato, bass heavy style of hip-hop featuring tempos around 130-140bpm and heavily spliced samples. There have been few songs of this genre on Monstercat but the most notable ones are Luv U Need U by Slushii and Alone by Marshmello. 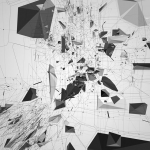