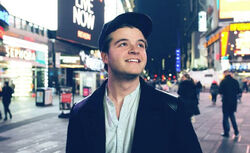 Haywyre is the stage name of Martin Vogt from Minneapolis, MN. He is currently signed to the Monstercat label.

Vogt had been studying piano since he was six years old. His interest in the production of various genres of electronic music and piano instrumentals began growing when he lived in Austria; there, he was exposed to jazz and hip-hop for the first time. After moving back to the US in 2008, he created the Haywyre moniker and started producing music that was a fuse of glitch hop and jazz.

Haywyre has release several albums, EPs, and singles since his debut in 2008.

Retrieved from "https://monstercat.fandom.com/wiki/Haywyre?oldid=5874"
Community content is available under CC-BY-SA unless otherwise noted.