What's on your mind?

Evalyn Is The Artist And Then She Probably Has A Different Aliases Called Mister Blonde Yeah Mister Blonde In 2016 Maybe I Guess Did Listen To This Song Could Be Her Case Familiar I Don't Know Who Could Be The Same Person? And Who Knows The Leak Of Her? Or? What About Something New That Can Happen? Like Sometimes She Can Be Disguised

The end of the year is approaching and we will soon have to vote for the Best of 2021. I don't know if we will still have the possibility of voting for a top 10 but if so, what will be yours? 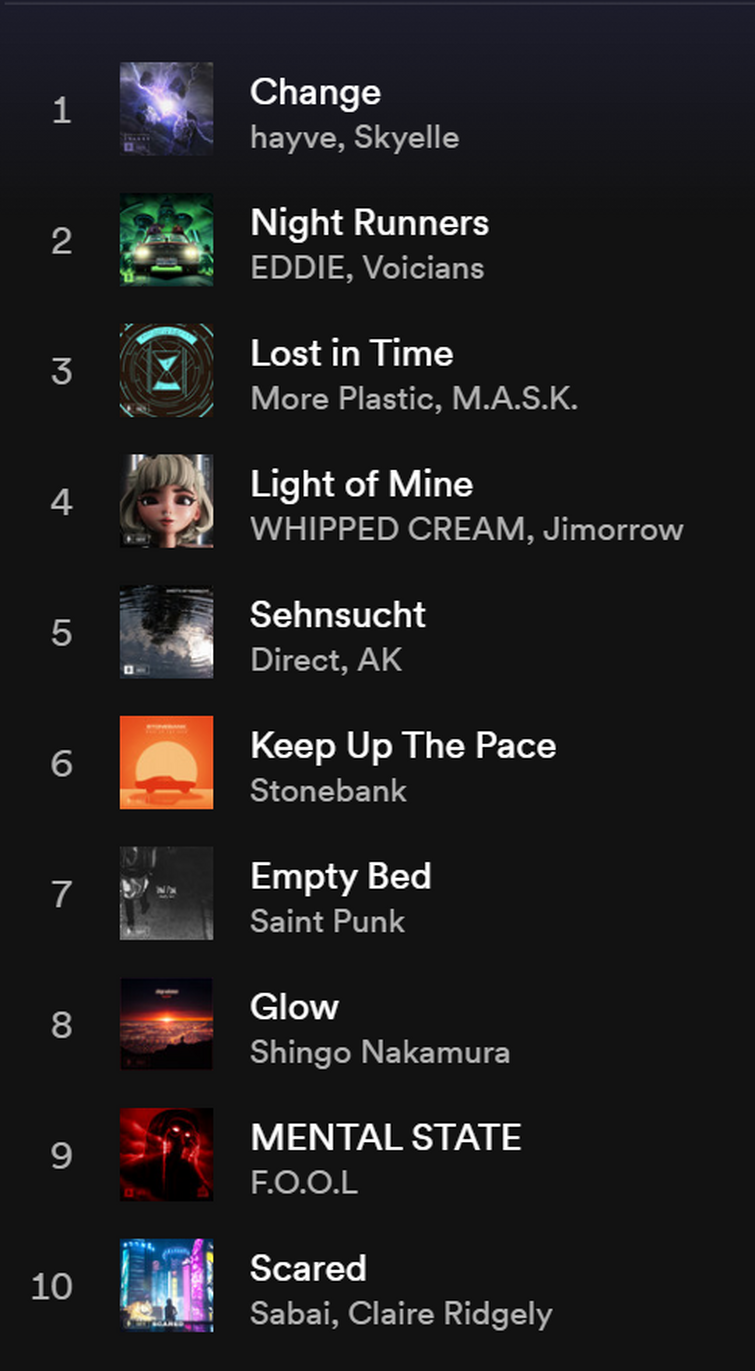 Should I add the presave links to unreleased songs' pages when they (the presaves) become available?

Is this a good idea?

So as y'all probably know, Forza Horizon 5 is now out everywhere! And as such, Forza have done the unthinkable (as usual) and licensed a bunch of Monstercat music to use within the game.

The Monstercat music used in the game is as follows:

Get To Know You - Dexter King feat. Aviella

Into The Light - Notaker feat. Karra

Hope this clears things up, and explains why there have been edits to these pages in the past few hours!

Hello everyone! I'd like to address the information that was shared during the Monstercat Community Q&A today, as well as what we will do with that info from here on out.

We know that the compilations have always been one of the most viewed pages on the Wiki, but it looks like that will be going away as of the brands (Uncaged and Instinct especially). Therefore, we will continue to update the Monstercat Discography page as well as the brand pages with the post-numbered-compilation releases.

Also, we are still looking for some help with the Silk Music Discography and creating pages for the songs and artists. If you'd like to find something to make and edit, this is a great place to start!

Thank you for your help, and keep on editing!

Did monstercat ever do a colab with Forza Horizon 4?

For some reason Are We Still Young was playing

I'd like to give you a few updates on some important tasks and policies.

First and foremost, I'd like to address the policies. There have been multiple users that have tried to create personal artist pages/articles. Our administration and other users have voiced that this is a site for Monstercat artists and information foremost. Therefore, I ask that you keep this type of information on your personal user page. Our policies for user page and naming have been updated with this information; please read them. Violation of these policies will result in a warning and/or temporary ban from our administrators.

Second, I'd like to mention the Fandom update. With a new look comes new themes, light and dark themes! Cumulocris and myself have worked on updating both themes. Try both of them out, and let us know what you think of them!

Next, I'd like to update you on the Podcast pages. A few years ago, we had a large gap of missing and incomplete pages in the Monstercat Podcast and Call of the Wild shows. I personally made it my task to help fill in the gap, and eventually it became a much larger toll for me to accomplish. Early this year, a group of users got together and took on the incredibly large task, including the Silk Showcase pages. As of today, I am proud to say that all the Podcast pages have been created and (for the most part) updated! I'd like to congratulate DEFYNT, Integral23, FlowinRivers, ExtraMeowth and many other users including past users that worked on making and editing these Podcasts pages.

This leads in to my final update, which is more of a new task for any users available. With the addition of Silk to the Monstercat label, our administration has been in talks about including the Silk discography to our Wiki. With Monstercat's website finally updated on the Silk merger, and getting some crucial information about EPs and albums from Jacob Henry (Label Director of Silk), we are finally ready to take on the task of adding Silk artists, songs, and albums prior to the merger back in February 2021. Admins Volcanron and Seren are leading the charge, with Volcanron making a Discography page, so if you have any Silk questions, please ask them! We would like to get as much help as possible for this!

Thank you for all of your continuing efforts, and keep on editing!

As of yesterday, former owner and Bureaucrat HopefulAlejandro aka Alej resigned from Wiki administrator. His resignation is heartfelt amongst our team and the community. He made bold and inspirational accomplishments to this site and the Wiki community, giving this site a chance at redemption from it's past toxicity.

For those that are new to this site and community, the Wiki wasn't in the best state some years ago. I came back to the site after a hiatus and joined the Discord server in early 2019; this is where the toxicity spewed from. I didn't notice it at first, but as time went on it was pretty clear that a few people were the cause of it. Alej was made an administrator at the time and sought to fix the toxicity as well as the unprofessional leadership at the time. As a start, within a couple weeks from joining, he as well as other administrators and community members succeeded in changing the pace and look of the Wiki from being a biased mess of information to being unbiased and truthful information.

A couple months later, one of the Bureaucrats caused a scare to the community by making the site look like it was being taken down. This was an "April Fools joke" that had not been discussed with the rest of the team, and because of that, Alej and the admins ask for them to step down from Bureaucrat. With this, EmbryoYall, a close friend and ally of Alej, became the sole owner and Bureaucrat and continued the push for change on the site and community. In September, EmbryoYall stepped down to Administrator, making Alej the new owner and Bureaucrat. From here, the Wiki started to see great changes.

The community was being reborn in late 2019 and 2020. Old toxic administration was stepping down and a new administration was formed, with making each person accountable and splitting the workload. I was one of the new admins at this time. Any toxic members in the community were removed. Policies were formed on the site for crediting sources. Alej and the admins reconnected with the Monstercat and subreddit communities, as well as form a better connection between the admin team and the Wiki community including on Discord. Suddenly, we could feel it: a breath of fresh air in the community and the site.

After all of the incredible work, Alej stepped down from owner in October 2020 to Administrator while focusing on his schooling, and he promoted me to the role. Around the time, I was struggling with my amount of time and work that I was considering stepping down from the team. Granted, I always wanted to be a Bureaucrat for the server, but I felt like the role would drain me. Even if I still feel like a lot of responsibility is on me, I'm still glad and thankful that Alej thought of me as being more than capable of leading this community.

And here we are. A couple months ago, he privately told me that his chapter of the Wiki would be over soon. He said that he accomplished all that he wanted to do and was proud of the work that he did. He restarted a dying and toxic community and made it a place that many of us can call home. He knows that his impact will live on through the current admins and the community going forward. I'm just glad that I can be here to tell his story, so that future members can remember and know of Alej and his amazing work on the Wiki.

Thank you, Alej, for everything that you've done here :')

This wiki growin, but the discussions are still dead.

Someone has to do something about that idk

Eptic is the BEST artist on monstercat! Even his non monstercat releases such as Mastermind and Bloodlust are good! His newest release was shadow people and I loved it!

Will Eptic make another song?

Has he QUIT his job?

Pausing new development to do some bug smashingCommunity Central

We're working on cleanup right now. All users were banned, all channels were flooded and re-named. It's a lot to take care of, but we'll get to the bottom of this.

What happened to Monstercat Wiki Discord server? I can't access to this server anymore. And also the invite link at the navigation bar is changed...